The good news for all Indians is that Ranjit Srivastava, who lives in Ranchi, has created a robot named Rashmi in the Indian version of a sophia. 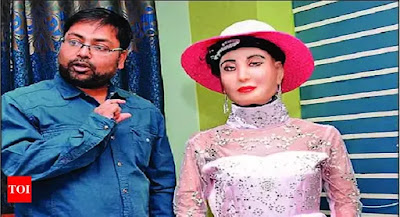 After all, what is special is that this Rashmi robot came to know that Rashmi is a fully homanoid robot that makes it special. Some of Rashmi's special features like linguistic interpretation (LI), artificial intelligence (AI), visual DATA and facial recognition system are prominent. If you talk about language then Rashmi can speak Hindi, English, Bhojpuri, Marathi.

Ranjit Srivastava travels from Ranchi. He got the inspiration to make Rashmi from Sophia Humanoid Robot When Ranjit saw Sophia in 2016, he thought that I would create a humanoid robot like this and the same happened as Ranjit based a robot based on Hong Kong's robot maker Who made him named Rashmi..A Master of Business Administration (MBA), Srivastava, who has over 15 years of expertise in software development, has developed the speaking robot in two years at a meager cost of Rs 50,000. 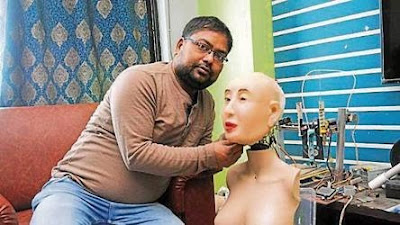 Ranjith says that he has created the world's first Hindi speaking robot. Let's know something about Rashmi and talk about some of Rashmi's abilities, Rashmi is India's first lip-synching robot. The LI feature makes him analyze the conversion. The AI ​​feature helps him to respond. If Rashmi sees someone's face once, she remembers him; That person meets him again, then she immediately recognizes him. Rashmi is also quite social It also answers as it is said., once upon a time a reporter said to Rashmi that you are ugly, Rashmi said go to hell and when the reporter said you are beautiful then she said thanks.When he was asked about his favorite actor, he replied to Shahrukh Khan. And when she was asked if she would get a chance to work in Bollywood, which actor would she like to work with "Rajni Kant got her answer"

what expert think about rashmi.

Dr. Somnath Chattopadhyay, associate professor at IIT-Indian School of Mines, Dhanbad, who is also the dean of innovation and incubation, said. I have not heard of any Hindi-speaking robot in India. However, I have not seen the robot, it is unbelievable if it was developed.